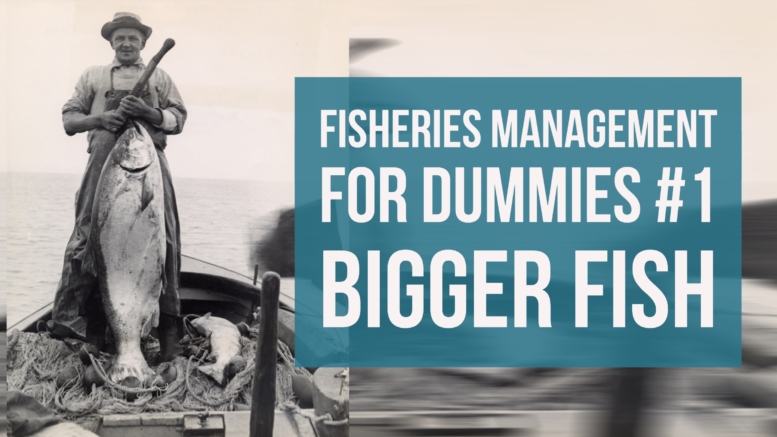 Taking a moment to look away from the chaotic Puget Sound Salmon Management negotiations themselves, we wanted to look for separate, constructive, management changes that would be less controversial to implement. Our hope is to broaden the solution palette — none of the changes we’re proposing require much more than a bit of imagination and a bit of policy making. Yet these changes could uniformly improve the situation in Puget Sound and beyond.

So we’ve decided to present a series of short “Dummies”-style articles that are designed to advocate some constructive, easy-to-implement, positive steps the co-managers could be taking to improve our collective situation. None of these Dummies ideas will require huge investments of money, and all will help improve our fisheries.

While lots of management decision making and hand wringing goes on about the counts of salmon, fish sizes/weights are not frequently discussed. We keep counts of individual salmon spawning, numbers released by hatcheries, and creel counts. But how big are these fish, and are things changing?

We noticed in recent years that the majority of Chinook “jacks” (typically two year old males) that we were catching during the marked selective fisheries in central Puget Sound were less than 22 inches in length. In addition some of the maturing females we were catching are often only 24 or 25 inches long. This is in stark contrast to what occurred in the 1960s and 70s. During that period on Puget Sound a jack or immature Chinook was defined by regulation to be less than 28 inches long. Mature females under 28 inches were rare. Our sense is that things are quite different today.

This idea that salmon seem to be getting smaller is backed up by data collected from 2007 thru 2014. A study of the coded wire tag data collected during the July/August Puget Sound Marine Areas 9 and 10 fisheries paints a clear picture. It shows that 70% of the 3 year old Chinook and 15% of the 4 year olds sampled in this period were less than 28 inches long. Most of today’s mature 3 year old and a sizable fraction of the 4 year old fish would have been considered jacks back in the 70’s!

Wanting to see if a trend was visible, we hit the archives. Happily, commercial landings data collected by WDFW includes not only the numbers of fish landed, but the total weight of those fish. We have a complete set of this data from 2003-2014, and here’s the graph of Non-Tribal commercial, Puget Sound Chinook landings for that period: 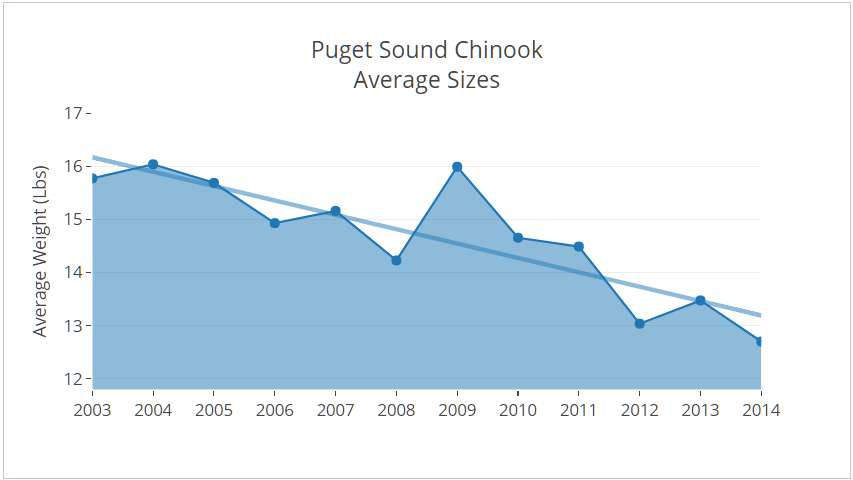 It’s really startling to see such a pronounced decline. The straight line is a calculated best-fit line, and the slope of it is -0.27. In English, that means the average Chinook has shrunk by a quarter-pound each year for the last ~10 years. That’s not just surprising, it’s terrifying!

This sense of declining fish sizes does not appear to be limited to Chinook… In researching this article, we located an old NOAA report including a long-term study on Coho salmon sizes… Here’s a link to the full report, but we’ve included clearest example of similar decline in coho sizes is this chart — covering nearly 60 years of commercial coho fisheries in Washington: 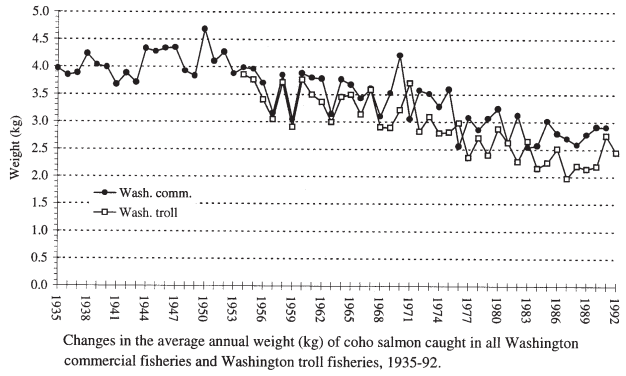 Like most ecosystem problems, there’s not a single root cause of the shrinking salmon: Forage abundance is down. Net fisheries are clearly more lethal to large fish vs. small ones–and apply downward selection pressure. Sport fisherman are likely to have a retention bias towards larger fish as well. Estuary habitats are degraded. The direct effect of these and other factors has continued to depress the size of the salmon in our region. This isn’t just lines on a chart–it is a clear reduction in the sport and commercial value of the catch we do have. So not only are there significantly fewer fish to catch, the ones we are catching are smaller than ever.

But consider another, not so obvious impact of reduced salmon sizes — the impact on the food supply for Orcas and other top predators. In a situation like Puget Sound, where ensuring that an adequate food supply is available for Orcas is an important management consideration, the shrinking size of our salmon takes on added importance. As sizes diminish, top predators will have to take larger and larger numbers of fish to meet their needs — and likely expend additional energy on the pursuit. It’s a vicious cycle.

Beyond More Hatchery Fish, How About Bigger Ones?

So here’s Fisheries Management for Dummies Idea #1 — when selecting spawners at in-state hatcheries, we suggest simply selecting the biggest fish. Now this can only work if sufficient hatchery fish are returning to allow for meaningful selection, so let’s do a quick check of the numbers. Happily, a review of a recent 5 year period shows that 9 of the 10 major fall Chinook hatcheries in Puget Sound had returns double and up to 5x their brood stock needs — so it appears there are sufficient supply to select for larger/faster growing fish.

We know there are many — including state legislators and WDFW commissioners — arguing for increasing hatchery production as part of any solution to state fisheries and resident orca concerns. While we aren’t against that idea in general, we believe selecting for bigger hatchery fish will be both less expensive and less fraught with legal issues (google: Wild Fish Conservancy Lawsuit) than expanding hatchery production would be. Finally, selecting for size can be done in addition to any changes to hatchery production levels, we don’t need to choose one or the other.

From our point of view selecting hatchery fish for size a simple idea whose time has come.

First, we would establish a crisp management goal to measure against. We’d suggest this simple goal: Increase the average size of the adult Chinook by 3 inches. How big an impact would this be? Starting with today’s average 30 inch (typically 12 pound) Chinook, we would be targeting a 33 inch (15-18 pound) fish — a 25 to 50% increase in weight. This has the following positive effects:

Best of all, this all can be done with only a minimal increase in hatchery operations and production costs. Our only question — when can we start!?!?