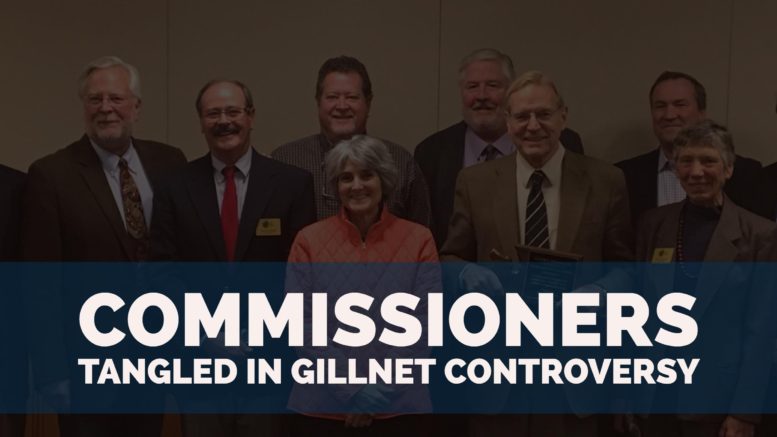 An extremely serious situation is emerging on the WDFW Commission itself, with commissioners who voted to support the Columbia River reforms being scrutinized and replaced by the Governor’s office. A string of specific and troubling developments this past week indicates at least 2, and as many of 3 of the 5 commissioners who voted in support of the policy could be removed and replaced within the coming weeks.

The story involves 4 commissioners, three of whom saw their terms expire on December 31st, and a fourth who has been appointed but never confirmed by the legislature. All are potentially vulnerable to replacement, and it appears their votes to sustain the removal of gillnets from the Columbia River is a litmus test for their continued membership on the Commission.

Commisioner Mahnken’s term expired on December 31st, and he announced his intention to retire from the commission at that time. At the last minute, he agreed to stay on for the final vote on the Columbia River gillnet reform — and he voted in favor of those reforms. His seat on the commission was recently filled by Barbara Baker. While we have an open mind about how commissioner Baker might vote on future Columbia River reform issues, we note a concerning detail from her short tenure with the commission: During her first commission conference call, (Jan 20, 2017, audio here) there were 20 minutes of discussion about a proposed Budget Policy Memo, which endorses the oversize economic and licensing revenue role of recreational fishing–and directs the department to consider expanding that opportunity where possible. Unfortunately, new Commissioner Baker spoke at great length about her opposition to this policy, speaking against it for 5 of the total 20 minute discussion.. We note that her objections were at least somewhat procedural in nature-a thin silver lining perhaps. We score this as a concerned wait-and-see.

Commissioner Thornburn’s term also expired on December 31st. She voted against the continuation of Columbia River gillnet reforms. Days after her No vote, she was promptly re-appointed by the governor, as announced in this press release from the WDFW.  The message? Vote in favor of gillnet interests, get re-nominated days later. We rate this as concerning.

Commissioner Carpenter’s term also expired on December 31st. He is the vice-chair of the commission, and the second longest serving member. He has been an active participant in many North of Falcon sessions, and is generally considered an advocate for recreational fishing interests. Carpenter is arguably the most knowledgeable commission member on the Columbia River, and neither the WDFW nor the recreational fishing community can afford to lose his service on the commission. He voted in favor of gillnet reforms–but unlike Commissioner Thornburn, his re-appointment has not been announced. The message? Vote against gillnet reform, suddenly you find yourself dusting off your resume. We rate this as very concerning.

Commissioner Wecker’s term on the commission is listed as ending in two years, but her situation is less certain than it might appear. Due to some complexities during her nomination (including Governor Inslee’s unsuccessful attempt to later rescind that nomination under pressure from gillnet advocates) she has been serving without being formally confirmed by the legislature. As a result, it is possible her nomination has “automatically” terminated when the new legislature was convened. This puts her commission seat in an unclear state–which is alarming for two reasons. First, she is one of, if not the most thoughtful and effective commissioners at working through complex issues–and if you spend time at commission meetings you can’t help but be impressed by her command. Second, she — you guessed it — she voted in favor of continued gillnet reforms on the Columbia River. We can see a pattern developing which would see her as the 3rd victim of the Empire Striking Back. We rate this situation as concerning.

This is a deeply troubling pattern, and we do not have a good handle on how quickly this situation will continue to develop. What is absolutely certain is that the political power of the gillnet lobby is being demonstrated. Remember there are just forty (yes, 4-0) gillnetters who take more than $10,000 worth of fish each year from the Columbia River. Those 40 people are being favored over the tens of thousands of recreational fishermen who paid millions of dollars in Columbia River Endorsements. People talk about draining the swamp in Washington D.C.? Well we have our own swamp to worry about right here in Washington State.

In the short term, we strongly encourage our readers to reach out to Governor Inslee (via his advisor on these matters: JT Austin, see below). We will not stand idly by while people of good conscience get picked off to protect the interests of a handful of politically well connected gillnetters.

We’ve created an easy way for you to make your voice heard! Use the letter we provided below, or better yet, draft your own!

Give the Governor Your Thoughts!

This petition is now closed.

47 Comments on "The Gillnet Empire Strikes Back | Commissioners Getting Picked Off?"