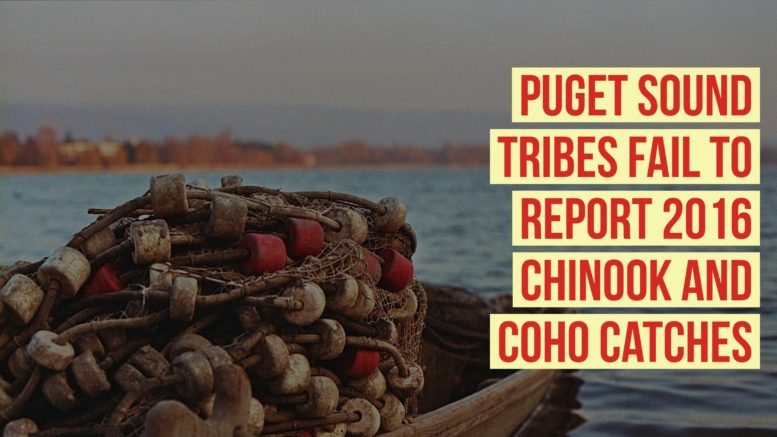 Researching a forthcoming story on 2016 Coho harvest, we submitted a public records request to the WDFW — covering all Tribal chinook and coho harvest from the past year. That records request was completed recently and the results were.. well.. Stunning.

At present, not a single Coho has been recorded as caught by the Puget Sound Tribes in 2016… You read that correctly–not one fish was reported caught. While we can’t yet make a firm estimate on the total unreported catch, we’re confident that on the order of 10,000 Coho were taken in waters adjacent to Seattle alone. Not a single one of them has been reported thus far.

In fact, once the stronger-than-expected run arrived, there were numerous tribes conducting Coho gill-net fisheries all over Puget Sound: Puyallup, Suquamish, Muckleshoot, Skokomish, etc.. How can none of these fisheries have been accounted for and tracked? How can the Tribes and WDFW expect to plan and execute seasons together in a cooperative way when the simplest forms of accountability — reporting catch — has broken down?

This isn’t just a little bit of missing data — this is a missing season for Tribal harvest of an entire run, across all of Puget Sound. On a normal year this would be unacceptable. But against the backdrop of the controversy and in-season management done last summer this goes past unacceptable and appears intentionally deceptive.

The 2016 Chinook reporting from the Tribes is better, but only slightly, with 6 tribes reporting catches. The Tulalip Tribe deserves credit–they appear to have submitted a full census of their Chinook fisheries: 230 fish tickets submitted and 1677 Chinook caught. The other five reporting tribes (Nooksack, Puyallup, Sauk-Suiattle, Swinomish, and Upper Skagit) combined to report just 37 additional fish tickets and 218 fish in total. Over the coming days, we’re going to compare these fish tickets to the days/dates these Tribes had Chinook fisheries open to get a sense for the quality of the reporting here.

Puget Sound treaty tribes with no reports of Chinook or Coho include the Suquamish, Muckleshoot, Skokomish, Lummi, Port Gamble S’Klallam, Jamestown S’Klallam, Lower Elwha, Makah, Squaxin Island, Stillaguamish, and Nooksack Tribes. As above, we’re going to crunch the data here to see how many days worth of openers went unreported, in total.

We can’t emphasize enough how damaging we feel this is to the already difficult season-setting process. Beyond the loss of the data itself to help better model future seasons, the lack of accountability and transparency is sure to further erode trust between the co-managers. This is the path of ruin — and exactly what we do not need on the heels of such a contentious 2016.

This is the first in a series of articles featuring post-game analysis of the 2016 Coho and Chinook season. If you like and support this sort of reporting, and you use Facebook, give us a Like or Share below!