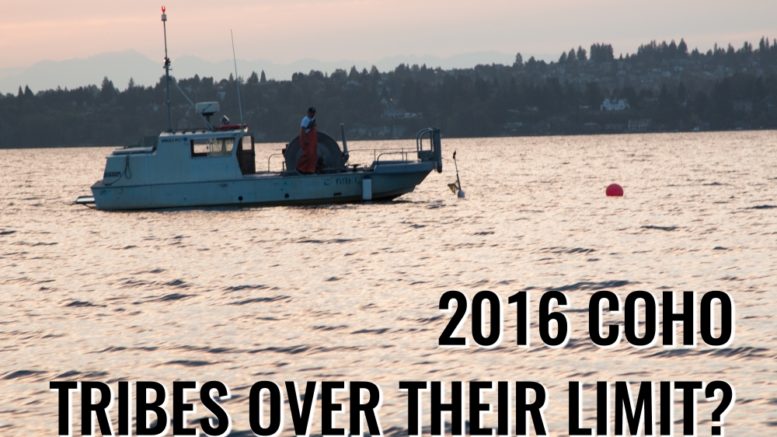 The unprecedented season that has been 2016 continues to reveal the limits of the current co-management of fisheries between the Tribes and the state. The first quarter saw the breakdown of the Tribal and state season setting North of Falcon process. Pressured by a critically low forecast for returning coho salmon, the sides couldn’t reach agreement on seasons. But the fireworks really got going with the commencement of Tribal fishing outside of co-manager agreed upon seasons, a remarkable departure from decades of co-management success.

And now, with the summer salmon season drawing to a close, we are entering a new phase–when the nature of the season will come into sharper focus. We begin to have access to catch-record information as well as other run-size related data sets. We believe these will show not only dramatic inequities in how the season was executed — but we suspect significant overfishing will have occurred by the Tribes.

We’ll study more fisheries as the data becomes available, but for now let’s examine the Ballard Locks/Lake Washington run of coho–where publicly available data permits some analysis.. The count at the locks is shown at 18,779 fish, which is our starting point. That run is gill-netted by two groups, the Suquamish and the Muckleshoot Tribes–and data we’ve received has them conservatively netting 1000-1500 fish per day combined in the early season… Given that the season has been open for 20 days (opened on Sept 16), and presuming some decline in the fishery as the season wore on, we are estimating the combined harvest from these two tribes at something like 10,000 coho presently — which we believe is roughly equally split between the two Tribes.

Presuming half of the catch was taken before being counted at the locks (Suquamish Tribe fishes downstream of the locks), the coho run arriving at Salmon Bay was 5000 fish higher than the count, or 23,779 fish. The list of agreed upon fisheries for the year (or LOAF, see Page 25 and 27 here) clearly states that 10,000 fish needed to arrive before a fishery can be opened, so we’re in agreement that it was reasonable to open fisheries in September. There were potentially 13,779 fish available to harvest this season.

So did the Tribes overfish? In our view the answer is yes. They are entitled to 50% of the harvestable fish, which is just shy of 7,000 fish, and we believe they’ve already taken 10,000. If the numbers are correct (and we will review them in detail when they are published officially) that’s nearly 50% overharvest to date.

More alarming? The Muckleshoot Tribe has just commenced 5 more days of additional gill-netting — From today, Sunday the 9th, and ending Thursday the 13th. They will be netting the length of the ship canal, Lake Union, and Lake Washington from the 520 bridge to within 250′ of the Sammamish Slough. On Thursday we reached out to the Muckleshoot Tribe, as well as WDFW, to raise this concern and ask for more supporting data to verify that the Tribes are within their allocation.  Neither has offered any comment.

In our view, the department, and fish and game enforcement should stop these gillnet openings. If our estimates are right, the Tribes are well beyond their permitted harvest. In a pivotal season like this one — we believe the State must stand up to this situation and get the nets taken out.