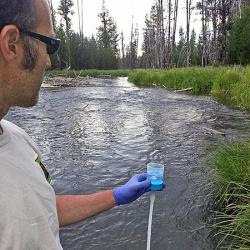 Dr. Shaun Clements, research scientist for the Oregon Department of Fish and Wildlife, tests the waters of the upper Deschutes River for environmental DNA. Scientists are now able to use eDNA to tell what species are present in aquatic populations. This technology will help reduce the cost of fish monitoring and provide an early warning if invasive species are present. (ODFW photo)

CORVALLIS, Ore. — The Oregon Department of Fish and Wildlife is moving into the next generation of monitoring fish populations — one of the toughest challenges in fish management — by using new environmental DNA (eDNA) science to quickly and accurately identify fish species in streams and lakes.

Traditional methods of monitoring, such as trapping, netting or electrofishing, take a lot of time and money, and sometimes don’t give the answers needed to make management decisions. However, the measurement of eDNA shows promise as a cost-effective means to supplement monitoring the distribution, abundance, and health of fish, amphibian, beaver, and other water-based species.

Environmental DNA refers to the DNA that is naturally released by all living organisms (including people) into their environment. The water in rivers and lakes contains millions of DNA particles, each with a unique signature. By sampling the water and decoding the DNA, researchers can tell if some of that DNA came from a coho salmon, beaver, spotted frog, or other species.

“We are working towards a future where our biologists can collect a water sample, analyze it on site, and determine which of Oregon’s native and non-native aquatic species are in the general vicinity,” said Dr. Shaun Clements, research scientist for ODFW. “eDNA has the potential to revolutionize fish monitoring.”

But for all this potential to become reality, according to Clements, researchers need to understand how eDNA moves through rivers and lakes. This means answering questions like: how far upstream might the fish be; 100 feet or 10 miles? How recently was the fish in the area? How can we distinguish if the eDNA from a fish was released into the stream by other sources like a boat, angler, or predator?

This technology also has a high potential to give an early warning of invasions by non-native species, such as the quagga mussel, that can be harmful to Oregon’s environment and cost the state millions of dollars.

“This method can detect very small amounts of DNA and because we don’t actually put our hands on the critter, we need to figure out what a positive detection of eDNA really means” said Clements. “eDNA methods can also provide improved sensitivity to detect rare and endangered species in comparison with traditional monitoring techniques.”

ODFW researchers plan to start a pilot study in the Alsea basin in the coming months. The pilot study is groundbreaking in its own way. Currently, researchers study eDNA movement in rivers by caging fish in streams or releasing water containing eDNA from hatchery reared fish. Clements says that these approaches have downsides to varying degrees because it’s difficult to control the amount, size, or timing of an eDNA release. To address these issues, ODFW researchers will use technology being pioneered in the food safety industry.

“Essentially, we will make custom eDNA to use as a tracer for the purpose of calibrating measurements of the natural eDNA collected in our river water samples,” said Clements.

Each tracer is a unique code that tells researchers when it was released, how much was released, and what size it was. In the food industry, this technique is being used to trace contaminated food back to its source. ODFW researchers will use it to trace eDNA in the water back to a precise point in space and time. Pending results, the researchers will implement a full study in rivers across the state in early 2017.

According to Clements, this and other research and development efforts will result in significant cost savings in fish monitoring and free up money to be put towards other priority uses.

Be the first to comment on "Oregon: Environmental DNA Used to Track Fish"